The American Red Cross is on the ground across six states as Tropical Storm Cindy brings the threat of dangerous flooding. As much as a foot of rain is predicted for some areas with strong storm surges along the coast.

Throughout Louisiana, Texas, Florida, Tennessee, Georgia and Mississippi, the Red Cross is ready to respond with volunteers, shelters and supplies as the storm moves inland. Three Red Cross and community shelters are already open in Georgia and Mississippi where 13 people spent Tuesday night. Some flooding is already occurring there and Red Cross workers are helping people impacted by early bands of the storm.

More shelters are on standby across the region if needed. People in the path of this storm should pay attention to local weather advisories and finalize their emergency plans now.

Tropical Storm Cindy is expected to hit the coast of Louisiana and Texas late today and move inland on Thursday, bringing dangerous flash flooding. Tornadoes are also possible. Rainfall will spread northeastward across Arkansas and into portions of the Tennessee and Ohio Valleys through Friday, with total rain accumulations of 3 to 5 inches with locally higher amounts possible. 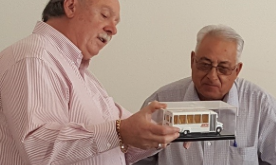