Udall, who helped author the bill as a senior member of the Senate Appropriations Committee and the Defense Appropriations Subcommittee, praised the bill’s strong funding for several programs that will benefit service members, military bases, and defense initiatives across New Mexico:

“New Mexico is home to multiple military bases and federal installations, and to thousands of men and women in uniform — which means we play an outsized role in defending our nation and spearheading essential defense programs. The bipartisan agreement passed today will fund critical investments in our defense systems and technologies, providing the women and men of our armed forces the resources they need to serve our nation safely and successfully,” said Udall.

“We secured substantial funding for Kirtland Air Force Base, which is pioneering research into directed energy technologies, and White Sands Missile Range, where test activities contribute significantly to our military readiness,” Udall continued. “And I’m particularly pleased that we saved key programs, such as the Space Rapid Capabilities Office and STARBASE, which are indispensable to New Mexico’s space economy. I’m proud to serve on the Senate Appropriations Committee, where I helped author this legislation and advocated for New Mexico’s interests — so we can continue to supply the nation with groundbreaking defense technologies and crucial programs for national security.”

Heinrich, who serves on the Senate Armed Service Committee, highlighted funding in the bill that will benefit New Mexico’s men and women in uniform, military installations, and job-creating initiatives throughout the state:

“New Mexicans make tremendous contributions to our national security and conduct some of the most critical missions for our military including training in fighter aircraft, carrying out search and rescue missions, and researching and developing the most advanced technologies.” said Heinrich. “This bipartisan bill makes major investments to ensure our Armed Forces can train and are equipped with the most modern technology so that we can stay ahead of our adversaries.”

“New Mexico is home to the Center of Excellence for small satellites and for directed energy weapons, and this bill increases funding to bolster those missions,” Heinrich continued. “These provisions, among many others, will benefit our economy and further New Mexico’s strong position as a leader in national security for years to come.”

The agreement secures funding for defense priorities that are vital to the interests of New Mexico, including:

Directed Energy Activities: $484 million will go toward research, development, and production of directed energy technologies, which includes $352.3 million to the Air Force and $131.9 million to the Navy, representing a $140 million increase in spending from the President’s budget. The funding will support initiatives to explore and develop directed energy and electric weapons systems, high energy laser research, prototyping and other technologies. This includes:

Kirtland Air Force Base, where these technologies were developed, is the epicenter of directed energy activities in the United States.

Aerospace Propulsion: $230.4 million for aerospace propulsion, including the following addition to the president’s budget request:

Space Responsive Capabilities Office at Kirtland Air Force Base: $371 million for the Space Rapid Capabilities Office (previously known as Operationally Responsive Space) at Kirtland Air Force Base, which is a $283.4 million increase from the fiscal year 2018 budget. The Rapid Capabilities Office is tasked with developing and fielding cutting-edge space capabilities, such as constellation satellite programs. New Mexico space businesses aim to benefit from this new organization and the opportunities it presents to increase reliable rapid access to space. Udall and Heinrich previously rescued the effort from elimination and have worked to increase its funding.

Advanced Weapons Technology: $53.4 million for Advanced Weapons Technology (a $7.9 million increase from the president’s budget proposal), including $10 million for a demonstrator laser weapon system. This funding would help improve space situational awareness, evaluate the efficacy of lasers against live fire targets and develop directed energy weapons for base defenses.

Peer-Reviewed Medical Research: Added $330 million to the president’s budget request for peer-reviewed medical research, included a new line to support research into the impacts of burn pits, Parkinson’s disease and multiple sclerosis. Senator Udall championed the creation of the Burn Pits registry and this new Peer-Reviewed Medical Research line will permit the Department of Defense to fund research into the health impacts of burn pits.

Since its inception in 1991, over 1 million students have benefited from the STARBASE Program, including nearly 8,000 5th grade students at the Air Force Research Laboratory at Kirtland Air Force Base. 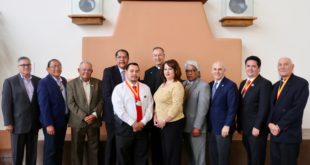