Zack Cole is right, referees miss some, but this is so common, coaches complaining won’t fix this.
Santa Fe High head coach Cole was referring to Wednesday night‘s key boys basketball game that his team lost 69-62 before a packed house at Capital’s Edward A. Ortiz Memorial gymnasium.
It was the fourth meeting between the two District 5-5A top teams, and now it’s all even at 2-2 and the Jaguars and Demons are both 8-1 and tied for first place with one regular-season game to be played Friday night, that being Capital traveling down I-25 to Albuquerque Manzano (8-15, 3-6) and Santa Fe High home to hapless, last place Albuquerque Rio Grande, which is 3-20 and 0-9.
It’s usually a tough go on the road, but at home the Jaguars routed the Monarchs, 77-44. The Demons shouldn’t have any problem versus the Ravens, who they romped over, 83-50, on the road. If a playoff game, which is not unusual between these cross-town rivals, is called for, it will probably be played Monday night at a neutral court, which could be Santa Fe Indian School or Pojoaque Valley.
Cole’s team, now 20-4 overall, was behind from the start when Capital (22-3) quickly took a 3-0 lead and the closest this game would get came in the final minutes of the fourth quarter, not counting the lone tie at 5-5 in the opening minutes of the first quarter. The Demons then trailed by as much as 17 points, and were down 57-42 heading into the final eight minutes.
Then with 2:54 showing on the scoreboard clock, 6-foot-7 junior Fedonta “JB” White caused one of the 12  Capital turnovers in that quarter with a steal, an easy layout, was fouled and made the free throw to trim the gap to 63-58.
Another Capital turnover caused by the Santa Fe High pressing defense put White in position for a classic dunk that cut the deficit to 63-60, but it also turned into a technical foul when a celebrating White flexed at Jaguar senior Seth Arroyos right after.That put Capital’s best foul shooter, senior Chano Herrerra, on the foul line for two shots, he made both and now with 1:40 left, it upped the lead to 65-60.
Demons sophomore Paul “PJ” Lovato then responded with a short jumper seven seconds later and it was 65-62 and Arroyos went down and out with a sprained ankle at the 1:08 mark. But again it was Herrera to the rescue, converting two more free throws with 29 seconds remaining and the visitors didn’t score again, and their 10-game win streak came to a halt while the Jags won their fifth straight.
Cole was upset because number one, it came at a crucial time, and two, he felt the T was uncalled for, said that there were other times when worse calls were missed, especially when Capital star senior Antonio “TJ” Sanchez followed up a missed shot with a soaring dunk in which Cole said Sanchez followed with some happy screams and flexing nearby Demon players after the play that began the fourth quarter.
Said Cole: :”JB did the same and picked up a technical. In my opinion neither should have been Ts. In this type of game, with this type of atmosphere, you’re going to make that call?.
The Jags were sailing along, only one turnover until the final quarter, but then they came in bunches that led to Demon baskets, sparked a surge that almost made for another exciting finish, but even after Arroyos, who scored 15 points (12 over the first quarters) that included a pair of 3s to go with three blocks, limped to the bench, his team had Herrera make the difference.
The 6-4 versatile Herrera missed his first charity toss and then made his final six. He also turned in 21 points, 15 coming in the second half. And he and Sanchez also tossed in a pair of 3s as Capital made nine of them from beyond the 3-point line. It was Sanchez, the program’s all-time leading career scorer, who scored the game-high 22 points, with 15 coming in the first half.
Only five Jaguars scored, with junior Dominic Luna, despite foul trouble, adding 10 that included two 3s, of which seven points came in the first quarter. Junior Angel Perra’s one 3-pointer added up to Capital’s total of 69 points.
For Santa Fe High, White paved the way with 20 points, two more than Lovato, junior Carlos Garcia found the range for four of his team’s six 3s and finished with 53 points. The three scored 53 of the Demons 62 points, the others coming on four points each from senior Jordan Campos and junior Cruz Martinez.
The Jaguars were solid from the foul line by making 12 of 13, while Santa Fe High was 6 for 10. Defensively, both teams went man-to-man.
Share

Previous Governor: Economic Development Initiatives will Boost Jobs and Growth
Next Capital, St. Michael’s and Santa Fe High qualified 26 wrestlers for the annual state tournament that runs today and Saturday at the Santa Ana Star Center in Rio Rancho, the Horsemen in A-3A, the Jaguars and Demons in 5A 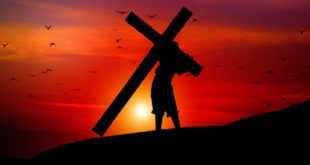 Cast All Your Anxieties on Him!

By Family policy alliance Humble yourselves, therefore, under the mighty hand of God so that …