Initially, Emma George had New Mexico Technical College in Socorro in mind when she concluded her junior year on the Capital High softball team. But because the school doesn’t have an athletic program and her senior season was shut down by the coronavirus pandemic, she had time to look elsewhere and include softball in her plans.
Enter Luna Community College in Las Vegas, N.M. There, at New Mexico Highlands University, her older brother Adrian had graduated, but was still taking premed classes. He had wrestled in high school at Santa Fe High and at Capital High, where Emma had been First Team All-District softball for three straight years, and also did some wrestling as well as running cross country. At age 22, he now seeks to become a doctor.
At 18 now, being behind the plate was where Emma gained honors from eighth grade to her junior season. Her former head coach, Sig Rivera, said she might have made All-State her final year, but the threat of the virus canceled that. As a junior, she batted .500. The previous three seasons she hit in the high 400s. On the 8th grade and freshmen lineups, she was the lead-off batter. She also displayed a strong throwing arm, although she says she often focused more on her pitchers.
“I haven’t seen the Luna campus yet,” she says, “but my dad and I met the head coach, and my brother and I have already found a house near New Mexico Highlands, and that would be about a mile from the Luna campus.”
The Luna CC head coach, Steve Wallace, is in his second year with the Rough Riders, who sport blue, white, teal uniforms, which will be rather familiar to Emma as her Capital Jaguars also feature teal.
As for Wallace, he’s a student of the game, having coached softball for 25 years. Originally from Washington, D.C., at Virginia State College, he played baseball for one year and ran track for four. He will be assisted by Tom Royber for the second year, and last season brought a 4-11 record.
Says Wallace: “We don’t practice until Aug. 3and expect to start the season on Aug. 17.We are a two-year school and Emma will be awarded a once-a-year athletic grant-in-aid.”
Glancing through last season’s Luna roster, the Rough RIders would be returning the entire roster of underclassmen, but that doesn’t always happen, especially when this virus can limit travel and players have made different plans. Thus, Wallace and Royber won’t be able to pencil in returnees and newcomers until at least the initial practice.
As for her family driving down I-25 East to watch her softball games, Emma says bro Adrian, her housemate, would probably do that, her parents would, too, and maybe even her oldest brother Alex, who is now 26 and envisioning a career in public safety. He wrestled at Capital when his dad, Ed, was assistant coach.
Rivera, who has now retired as the softball coach to devote more time to his young children in baseball, has been working out Emma in running on Monday, Wednesday and Fridays, and in the mornings on softball batting and throwing.
Emma and right-handed pitcher Angelica (Jelly) Angel are the only Jags to make it to college ball when Angel, a transfer from Santa Fe High, signed on with Colorado’s Trinidad State Junior College, which is on Luna CC’s schedule. 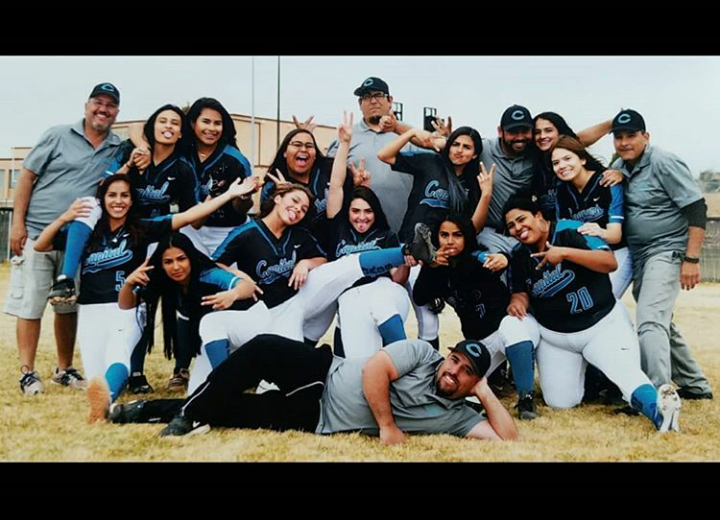