High school football, Friday night under the lights.
Santa Fe High (4-1) should come away with its 5th win when it welcomes windless District 5-6A Albuquerque Manzano (0-3) to Ivan Head Stadium.
Santa Fe Indian School (4-1) should do the same up at windless Espanola Valley (0-5) in a non-district contest.
At Capital (2-2), the Jaguars should have a tough go against Belen (2-2) in non-district play.
And on Saturday afternoon at Christian Brothers Athletic Complex, St. Michael’s (2-2) will unveil its new starting quarterback as unbeaten Socorro (4-0) visits in a non-district test. One change for the Warriors. They had been ranked No. 1 in Class 3A, but now the top of the heap belongs to 5-0 Raton.
And with Socorro and its vanilla early schedule, dropping to second, comes St. Michael’s, Robertson, West Las Vegas in that order, and the fifth member of this District 2-3A, Indian School, is ranked 13th.
In 6A, the Demons became No. 10 after the road loss to Albuquerque Eldorado, and Manzano could do no better then 19th. In 5A, the Jaguars are at No. 9 and Belen a No. 8, which sounds like a good match-up.
To get to the chase, Santa Fe High knows it didn’t have a good game versus the Eagles. Incomplete passes, dropped passes, and an offensive line that had played well in previous games, plus on defense couldn’t bring down the hard-charging running backs, and allowed too many completed passes.
Offensively, it wasn’t the usual one-two punch of seniors Luc Jaramillo, the quarterback, and Martell Mora, the swift running back. It just wasn’t a good day for the two of them, Jaramillo made mistakes and Mora was slowed down, thus the defeat that head coach Andrew Martinez wasn’t happy about.
After the game at Wilson Stadium, the fifth-year skipper pounced on his team and included the words, “And I don’t want to hear anything about our homecoming game against Albuquerque Manzano.”
Well, the Monarchs don’t appear to offer much of a test and Santa Fe High figures to be fired-up for this one. Manzano has one big deal and that’s a 129-player roster that includes 30 freshmen, 35 sophomores, 20 juniors and 41 seniors, which of course leaves less room on the sidelines.
Numbers, just numbers, after losing 55-0 in the opener at top-ranked Rio Rancho Cleveland, 63-20 at home versus Albuquerque Volcano Vista and 40-13 against visiting Mayfield. The Monarchs have scored only 33 points and have given up 158.
Capital meets up with other Eagles, a well-regarded Belen program that has had some impressive seasons. It opened with a pair of setbacks, 53-0 at top-ranked 5A Farmington, and 21-7 at No. 7 Artesia, which has won the most state championships in the state, then won at No. 11 Miyamura, 23-7, and at home, 20-14 in overtime versus No. 5 Piedra Vista.
As seen, it has played a strong early slate, and has been outscored 63-95. It plays a run-and-gun game, it is aggressive on defense, and has depth. The win over Piedra Vista also points to its improvement.
Capital, under new head coach Joaquin (Wax) Garcia, has only two seniors and is leaning game by game. It is quarterbacked by versatile junior Julian Munoz, and he is equally adept at running and passing.
Along the ground, he has handed off mostly to sophomores Joe Rodriguez and Francisco Diaz, and his pet target through the air has been senior wide receiver Brandon Solis. Diaz, at linebacker and Rodriguez at safety and 5-11 junior corner back Anthony Anaya III have played well on defense.
“We are young and inexperienced,” Garcia says, “and just learning more each week.”
At Indian School, new head coach Bill Moon and his trusty assistant Kevin Hauck have done a masterful job with a young and younger team that has turned back Cuba, Laguna-Acuma, Fort Wingate and Espanola McCurdy, with the lone loss at Pojoaque Valley.
On offense, the running game has relied on the one-two punch of sophomore Taylor Torivio and senior Fenyx Moringdove, whose father, Jarvis, is also an assistant coach. Torivio has made big runs in close games and Moringdove has done the same. On defense, Torivio has also excelled as a middle linebacker.
How young is this 43-player roster? How about a pair of 7th-graders, 10 8th-graders, eight freshmen, and only seven seniors.
“They are a good group of kids,” Moon says, “They want to learn and it’s a pleasure coaching them.”
As for Espanola Valley, it has lost its five starts, with only the opening game at home against Los Alamos (57-42) any kind of a contest after three quarters. The others weren’t close, 54-0 at Bernalillo, 56-8 versus visiting Socorro, 64-14 at West Las Vegas, and 54-0 at Robertson.
It has been torched for 285 points and has tallied only 62. Its lone threat has been 5-3, 115-pound sophomore running back Jack Purdy on a roster of 18 freshman, 12 sophomores, 15 juniors, and only five seniors.
Then there’s Socorro. It won its home opener, 36-0, over a non-varsity opponent and it was a game that shouldn’t even be included on the varsity schedule. Then came a 51-6 win at Miyamura, a 56-8 rout at Espanola Valley, a 35-3 triumph over visiting Albuquerque Hope Christian, and a 20-0 success at 2A Estancia.
Yes, the Warriors have totaled 198 points, and have yielded only 17, but their opponents have an overall record of 4-15.
Meanwhile, the Horsemen appear set at their new quarterback after they lost 4-year starter Lucas Coriz to a serious knee injury for the season in the early part of the game against Santa Fe High. He has already had surgery on the torn ligaments, but will need another.
And so head coach Joey Fernandez began with five different players at the position at practice, comes off a bye weekend, and has named initial starter, junior Jacob Katko, and junior Zachary Martinez to get the snaps. Fernandez has altered the passing game, but will stick with the running game that has done well with a balanced lineup of ball carriers.
Share 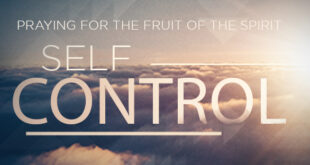 “But the fruit of the Spirit is love, joy, peace, forbearance, kindness, goodness, faithfulness, gentleness …