Santa Fe, N.M. – New Mexico Film Office Director Nick Maniatis announced that the state will be celebrating the 120th year of filming in New Mexico beginning in December. This milestone in New Mexico film history will be commemorated at events throughout 2017 – 2018.
“For 120 years, New Mexico has been at the heart of the film industry,” said Film Office Director Nick Maniatis. “We are continuing to build on that strong tradition by attracting new productions to New Mexico and creating the film industry’s greatest economic impact in New Mexico history, three years in a row.”
New Mexico is consistently ranked in the top 5 places to shoot a film or television project in the United States, with the film industry contributing over half a billion dollars of direct spending into the state’s economy last year.
New Mexico film history predates New Mexico’s establishment as a state. Shot in 1898, one of the first films made on the newly developed Edison Camera: “Indian Day School” was a 50 second depiction of children exiting a schoolhouse at Isleta Pueblo, New Mexico.
This film was the start a long history of filmmaking in New Mexico. Some highlights include:
1912 – D. W. Griffith returned to the Isleta Pueblo to make a Romeo-and-Juliet tale about a Hopi maiden and her Pueblo lover, “A Pueblo Legend.”
1913 – Director Romaine Fielding began shooting in Silver City, NM and later moved his company to Las Vegas, NM where he made a dozen featurettes. Selig Polyscope also used Las Vegas as the backdrop for as many as 30 Tom Mix short westerns.
1920’s – “White Renegade” was produced as a silent film in 1929, but the producers held back its release until they could add sound and music, which they did and released it in 1931 as a “talkie.”
1930 – A King Vidor production of “Billy the Kid” ushered in a golden age for Gallup, NM film production. From 1930 and well into the 60’s, Gallup served as the back drop of such films as “The Sea of Grass” (1947), “Only the Valiant” (1951), “Ace in the Hole” (1951) and “The Hallelujah Trail” (1965). More than 92 films had been shot in New Mexico by 1950.
1960’s and 70’s – Indie titles such as “Easy Rider” (1969), “Red Sky at Morning”, “Two Lane Back Drop” (1971) and “The Man Who Fell to Earth” came to New Mexico.
In more recent memory, “No Country for Old Men” (2006), “Terminator Salvation” (2007), “Avengers” (2012), “Batman vs Superman” (2014) as well as acclaimed TV shows such as “Longmire,” “Breaking Bad,” “The Night Shift,” and “Better Call Saul” have made the state their home.
Commemoration of the 120th Year of Filmmaking in New Mexico will “Kick Off” at this year’s Gildan New Mexico Bowl football game on December 16, 2017 on the campus of the University of New Mexico in Albuquerque. The New Mexico Film Office will be tailgating with the iconic Breaking Bad RV and a replica of Walter White’s Aztec courtesy of Breaking Bad Tours (www.breakingbadrvtours.com).  In the first quarter of the game New Mexico Film Office Director Nick Maniatis will be escorting actor Anne Heche from NBC’s “The Brave,” onto the field while screening production highlights shot in New Mexico over this past year.
The New Mexico State Film Office, a division of the New Mexico Economic Development Department, serves the film and television industry locally, nationally and internationally. The purpose of the Film Office is to market the state to this industry, service the productions and promote jobs for New Mexicans. The Film Office offers many resources to producers, film crew and local filmmakers. The Film Office works diligently to assist productions with finding potential filming locations. The Film Office consults with productions regarding the financial aspects of their projects, guiding them through the incentives such as the 25% Refundable Film Production Tax Credit and the Film Crew Advancement Program. The Film Office connects productions with the crew, vendor services and film liaisons throughout the state. In addition to promoting and providing production services, the film office is initiating emerging media opportunities for the state and working to expand industry infrastructure. The support of New Mexican filmmakers is a priority for this division as is expanding the Statewide Film Liaison Network, promoting Educational Outreach and leading the state in the NM Film Tourism Initiative.
Share 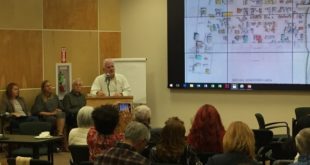