It might have been a tuneup, but it was a struggle throughout as the Demons ran into a Rams’ team that tossed in 10 3s and led early in a game that brought seven lead changes and six ties and dropped the home team to 2-2.
Demons’ 6-foot-7 junior Fedonta  “jb” White paved the way for his team with 20 points before fouling out in the final two minutes. He was good for four of Santa Fe High’s eight 3s, took down 11 rebounds, and blocked four shots. But the Demons fell behind early until tying the score at 7-7, but then the gap became 13-7 for them, and they trailed 21-13 after one quarter.
But in the second quarter, the play of White and versatile senior Carlos Dassaro deadlocked the score at 21-21. The lead then got back to the Rams and it remained close at halftime when Santa Fe High fell behind 35-32 even though it outscored Rio Rancho,19-14, in those eight minutes. White had already picked up his third personal foul just before intermission, but Dassaro came out firing when action resumed and found the range for a trio of 3s included in his total of 18 points.
Heading into the fourth quarter, the lead had changed five times and there were two more ties at 30-all and 32-all as the Rams remained in front 58-54 behind the long-ranked shooting of senior guard Vance Rudolph, who hit for four 3s, tallied 15 points, and was assisted by 19 points from junior wing Christian Lucero, who added three more 3s, while Junior Hodnert, who had 2 of the 3s and converted 6-of-8 free throws for 12 points.
But the Demons, now 4-0, with a first-round opponent in 3A Crownpoint (1-3) at the Al Armendariz tournament, regained the lead at 59-58 on a basket from sophomore Paul Lovato, and maintained it as junior guard Cruz Martinez made good on four charity tosses, Dassaro hit for another 3, and after White fouled out, the gap for Rio Rancho became 65-64.
it stayed that close until junior Cody Garcia turned a steal into a basket for the Demons, and Lovato’s outside jumper upped the margin to 69-64, and the visitors held on to cart off the tough win and happily hoped the bus for the ride home. They outscored the Rams in the final eight minutes 18-12.
In other boys games, St. Michael’s, now 4-1, plays in the Rio Rancho Cleveland tournament that begins Thursday after coasting on the road 68-51 up at Pojoaque Valley, while Santa Fe Indian School dropped to 1-3 in a 89-56 rout versus visiting Espanola Valley, Taos rolled over Aztec on the road, 80-34, and Valencia turned back Robertson, 55-44, in Las Vegas.
And Tohatchi, in a tuneup for its appearance in the Armendariz tourney, lost 75-48, to Bloomfield, and is now 3-2 with an opener versus host Capital, which has won three of four starts, the one loss coming against host Santa Fe High in the final of the annual Bobby Rodriguez/Capital City tournament.
The Horsemen open against Roswell at the Storm court after they were led by senior Thomas Wood’s 21 points and dozen rebounds,with the contest scheduled for a 5:30 p.m. start.
In girls game, St. Michael’s (2-4) had trouble putting the ball in the basket and were overwhelmed 45-20 by visiting Bernalillo (4-1). defending state 2A champion Pecos won 53-10 over visiting East Mountain, Indian School handily disposed of Albuquerque Sandia Prep, 57-23, on the road, Portales won at West Las Vegas, 71-53, visiting Mesa Vista dominated Santa Fe Prep, 46-20, and Albuquerque Cottonwood Classical Prep took down Monte del Sol, 58-45, in Santa Fe.
The Armendariz tournament tips off at 8 a.m. when the Pecos girls face Indian School, followed by the Panthers’ defending state champion boys going against Kirtland Central at approximately 9:30. Both Pecos teams stand at 2-0, while the Brave girls are 3-1 and KC boys at 1-1.
And there were the visiting Tohatchi girls also getting a tuneup for the Armendariz tourney by coasting over Rehoboth, 63-26. Tohatchi (3-1) opens against Santa Fe High, which is 2-2.

Previous Girl’s wrestling teams in New Mexico will be on the mats this season, with 63 schools hoping for enough turnouts to complete rosters and put together schedules, and this includes Santa Fe High, Capital, St. Michael’s, and Pecos
Next Youth Conservation Corp announces country’s first-ever Outdoor Equity Fund 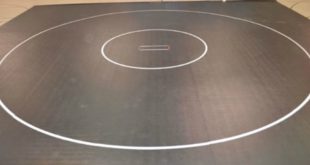 Girl’s wrestling teams in New Mexico will be on the mats this season, with 63 schools hoping for enough turnouts to complete rosters and put together schedules, and this includes Santa Fe High, Capital, St. Michael’s, and Pecos