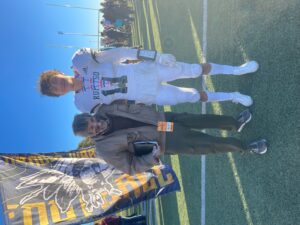 It was two decades ago, a sunny Saturday afternoon at St. Michael’s Christian Brothers Athletic Complex. It was the semifinals of the then-state 4A playoffs. It was a back-and-forth tussle now in the fourth overtime as the sun continued to fade into the sunset.
“We had spoken to the officials about maybe heading over to a nearby football field,” said Keif Johnson, then an assistant Ruidoso football coach and head coach of both baseball and wrestling. “It was a big crowd to start with, and they weren’t exactly looking to exit.”
Now flash forward to Saturday afternoonat Ivan Head Stadium in Santa Fe. It was getting close to kickoff time between the 2nd-seeded Warriors and 4th-seeded Horsemen as Coach Johnson, now in his 16th year as head of the football program, came over to me and we had a brief talk about that day, and the time we spoke in 2013-14 after Ruidoso won its second state titles.
Nice of him to spare me the time. Game approaching, coach met with me, and it kind of made my day. The rest of the 1 o’clock kickoff belonged to his Warriors. Forget the final score of 12-0. The Warriors scored back-to-back touchdowns quickly, one of 50 yards to wide open senior Sandoval, the other 46 yards to again wide-open speedy Sandoval.
Defense, forget about it. The home actual home side who initially intended to play host before the tilt was switched up the road to the home of 6A Santa Fe High.
From the opening kickoff in 50-degreees of a pleasant day, to the final whistle, the visitors ruled supreme.  Confident senior quarterback Cooper Pritchett simply masterminded a truly offensive attack, and the rest of his team just took care of business. The final score could have been greater, Johnson’s team had numerous other chances, St. Michael’s not much of anything.
Just take a glance at the statistics. First downs were something like maybe four for the Horsemen. The Warriors had a whooping 18. Along the ground, it was Ruidoso grinding out 157, St. Michael’s a measly 25. Through the air, the Warriors was also pass-happy with the 5-10, 140-pound Pritchett totaling 237. He completed 11 of 17 attempts, to mostly Sandoval, the game’s Most Valuable Player.
But it was a dismal time for St. Michael’s senior quarterback Zach Martinez as he made good on seven throws for only 40 yards, was minus running the ball, as was senior running back Marcus Abeya, and No. 1 receiver, senior Creed Chavez, made but two catches.
“I knew I could beat these guys downfield,” said 5-11, 160-pound Sandoval.
The team’s top ball carrier, 5-10, 175 Kaden Sago, added 43 yards on the ground. Pritchett added 33, the longest late in the game a fake and run down the sidelines to the St. Michael’s 18. They didn’t score, but
If that wasn’t enough.
Martinez was sacked three times, intercepted three times, he just couldn’t get his offense past the Ruidoso 43. Penalties were many for head coach Joey Fernandez, now in his 21st season at the reigns of his alma mater. ware called in every department, offsides, too many players on the field, personal fouls, defensive interferences, whatever it took as yellow flags were dropped only five times by fired-up Ruidoso.
Afterwards, Johnson sent a few words my way and said to his players: “I was just so proud the way you handled things, the confidence you showed, great, great job guys.”
His words to me were simply said. “Well, it’s been 16 years now and perhaps retirement time. It’s been a long haul, and now we have three states.”
Speed and more speed was much too much for the Horsemen to overcome, especially when Sandoval broke downfield. On defense, St. Michael’s would fling the ball while Martinez was often hurried and the defense just batted passes down, intercepted twice by Sandoval. Just nothing doing.
Pritchett added 33 yards, the longest one of 27 yards on a fake down the sidelines to the Horsemen 18 in the final quarter. They didn’t score, but without a kicker, they also missed the two point-afters, but it mattered little because this was bound to be a shutout, the only one in the four state finals.
That’s right, in 6A, top-seed Rio Rancho Cleveland set a record with a wild 75-61 conquest of 2nd-seeded Albuquerque La Cueva at Albuquerque Wilson Stadium. In 5A at Farmington’s Hutchson Stadium hosted by 3rd-seeded Piedra Vista, a 24-13 triumph for top-seeded Artesia, and in 4A at 2nd-seeded Bloomfield, the home team bettered No. 1-seed Silver, 21-7.
While the two 3A teams gathered at midfield for first and second place awards, it was celebration time for Johnson’s spirted youngsters and a down and out Horsemen contingent disappointing and looking on.
For Sandoval, it was an afternoon of a dozen receptions. It was like catch him if you can, but they couldn’tN It was a 139-mile trip from the school south of Las Cruces. They arrived in the City Different on Friday, spent the night at a motel, and everything worked in its favor while St. Michael’s spent Friday night in its own beds.
Ruidoso brought a load of supporters who took up every spot in the visitors parking lot and filled the stands on its side. By game time, these stands were packed while St. Michael’s across the way had plenty of empty seats early on.
The Warriors, like the Horsemen, had been 4A teams when Ruidoso had only 250 students, and it was the same for this contest. Now the Warriors had a state title in 4A and two in 3A as St. Michael’s fell short in its quest for Fernandez’ fourth state championship.
Way short.
Share
Previous God‘s Encouraging Word of the day
Next Gods Encouraging Word of the day

“Trust in the Lord with all your heart; do not depend on your own understanding. …