Give Hope to Israel with this CUFI Christmas Ornament

In recent weeks, Israel suffered the most severe rocket barrage in its history. Hamas and its accomplices in the Gaza Strip launched coordinated attacks, sending almost 500 rockets toward Israel in just 25 hours. Israel’s Iron Dome was pushed to its limits.
Israeli homes, businesses, and other property were destroyed throughout the border region of southern Israel. Over 100 Israelis were treated by emergency services for wounds and trauma related to the attacks. A huge portion of Israel’s population spent nearly two days huddled in bomb shelters until quiet was restored. Extensive damage was done, not just physically and financially, but also to the spirits of Israel’s citizens.
The area surrounding Gaza had already suffered 12 years of sporadic rocket fire from the territory controlled by Hamas. More than 20,000 rockets have rained down on communities such as Sderot and others along the border since 2006. In that time, the local economy of these communities has been impacted dramatically, and the people who live there have been terrorized repeatedly. Every Israeli child in this region under the age of 12 has been forced to live within 30 seconds of a bomb shelter for their entire lives.
The people of Israel, especially in this southern border region near Gaza, need a fresh infusion of hope. They need to know they are not alone in this world. They also need practical support for their economy to recover and give their families a future.
As we look ahead toward Christmas and the joy of the coming sacred season, let’s remember our friends in Israel who need us. While putting up your Christmas tree this year, hang the CUFI Christmas ornament custom-made for our members by artisans in southern Israel. This ornament comes from the very region that has been hardest hit by terrorism for the last 12 years.
Israel’s national anthem and the essence of its existence for the last 70 years has been hope. Israel was founded on hope, and it will continue to thrive as long as its people have hope in the God of Israel and His faithfulness to the promise He made to Abraham. This Christmas, you can give the people of Israel the gift of hope by ordering this CUFI ornament and hanging it on your tree as a symbol of your love and as practical support for their continued existence in their homeland.
By ordering this ornament, you not only directly support Israel’s economy, you also give millions of Israelis hope for a better future by ensuring that Christians United for Israel will remain an effective advocate for the US-Israel relationship in 2020.
Share 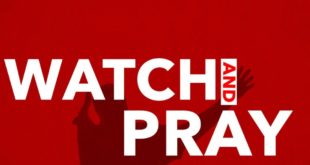 “Watch and pray that you may not enter into temptation. The spirit indeed is willing, …